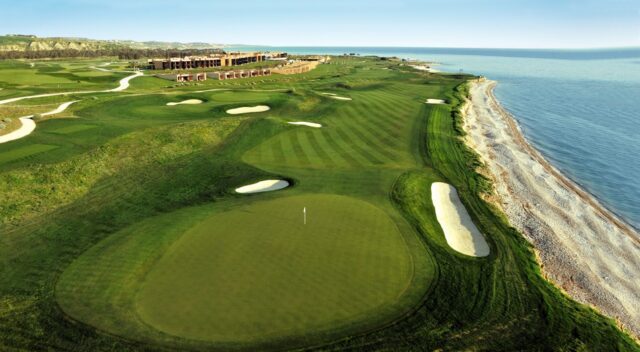 Sicily’s Verdura Resort has further established its place among the most beautiful golf destinations in the world, with 2018 Rocco Forte Sicilian Open winner Joaquim Lagergren leading the plaudits for the multi-award-winning venue.

The tournament – the second year in a row that it has been staged at the resort – attracted an impressive line-up headed by European Ryder Cup captain Thomas Bjørn, defending champion Alvaro Quirós and 2014 European Ryder Cup star Andy Sullivan.

Lagergren secured his maiden victory on the European Tour by holing an eight-foot birdie putt on the first extra hole of a play-off with France’s Mike Lorenzo-Vera, and the Swede was among the players queueing up to praise Verdura Resort after receiving his trophy from tournament host, Sir Rocco Forte.

“I love this place,” said Lagergren. “The golf course is awesome and you get a view over the Mediterranean on nearly every hole.

“The course we played was in awesome condition. The greens are really good and these are probably the best fairways that we have played all year.”

“The Rocco Forte Verdura Resort is world class. Can’t wait to come back!”

The 2018 Rocco Forte Sicilian Open was staged again on one of the most spectacular and picturesque courses on the  European Tour calendar, with a composite course combining the finest holes from the venue’s two 18-hole championship courses, the East Course and West Course.

Measuring 7,217 yards, the par-71 lay-out comprised of nine holes each from the two Kyle Phillips-designed courses and included one of the most dramatic finishes in world tournament golf, with the final six holes running adjacent to the coast and set against the stunning backdrop of the Mediterranean Sea.

And, in addition to having their skills put to the test on Verdura Resort’s acclaimed golf courses, the players and their families also had the chance to experience the exclusive venue’s array of other first-class facilities during an unforgettable week.

Sullivan said: “It’s just so relaxed out here and it’s just such a beautiful setting. Anytime you get scenery like this and holes next to the sea as it is, it’s absolutely fantastic, and the course was in unbelievable condition.”

Fellow Englishman Eddie Pepperell said: “I came last year for the first time with my girlfriend and we loved it. You have great food, great rooms, a really nice course and lovely weather, so it is kind of as much of a holiday as it is a golf tournament for me, and I like to have a few of those a year where you can kind of amend your priorities somewhat if you like.

“Quirós added: “It is a lovely place, I mean it’s a paradise in the middle of Sicily. It’s a great place – we have lovely restaurants and the golf course is a very nice one too, especially this year as it was in great shape.”

Nestling on the coast in 230 hectares of stunning landscape, Verdura Resort – a Rocco Forte hotel and European Tour destination – is ideal for a golf break and features two outstanding 18-hole championship courses – the East Course and West Course – as well as a par-three nine-hole course, all designed by Kyle Phillips.

Situated on Sicily’s southern coast between Agrigento and the fishing city of Sciacca, an 80-minute drive from Trapani and Palermo airports, the resort features 203 rooms, suites and villas all with a sea view, as well as three new villas which offer a perfect solution for family holidays, each with its own private swimming pool.

Serving up a mixture of sunny skies, a temperate climate and breathtaking scenery, combined with a plethora of historical, cultural and gastronomic delights, Sicily has all the ingredients for a relaxing break, and Verdura Resort is the ideal base to discover this authentic part of the Mediterranean’s largest island.

For more information on Verdura Resort and to book, visit roccofortehotels.com/verdura-resort

The resort is set in 230 hectares of stunning landscape overlooking the Mediterranean with 1.8km of private coastline, and offers golfing guests and families an unparalleled modern five-star experience on the largest island in the Mediterranean. The resort is located on the southern coast of Sicily between Agrigento and the fishing city of Sciacca, a 80-minute drive from Trapani and Palermo airports.

Verdura features 203 rooms, suites and villas all with sea views, and is a paradise for golfers with its outstanding facilities. Players from all over the world come to enjoy the two 18-hole championship courses and a nine-hole par-three course, with all three links-style layouts designed by world-renowned golf architect Kyle Phillips, built to the highest specifications and playable all-year-round.  A member of the exclusive European Tour Properties network as a European Tour Destination, Verdura was the host venue for the 2012 Sicilian Open and had the honour of staging the 2017 Rocco Forte Open – Verdura. The resort’s East Course is ranked as one of the finest in continental Europe while its beautiful West Course, also a par-72, provides the ideal complement and features one of the most memorable finishes anywhere in the world with the final four holes set alongside the Mediterranean. The courses are matched by outstanding practice amenities including a double-ended driving range and excellent golf academy.

Guests can sample an authentic taste of traditional Sicily with an array of dishes at one of the resort’s four restaurants and five bars – with  fresh, organic produce sourced straight from Verdura’s own garden. In addition, visitors can enjoy an array of cultural and culinary experiences where they can discover the secrets of Sicilian cooking, with menus inspired by celebrity chef Fulvio Pierangelini, and taste the many famous wines of the region. There is also plenty to keep the younger members of the family entertained with dedicated kids and teen clubs providing a variety of fun-packed activity programmes throughout the year.

Verdura Resort has received widespread international recognition and won numerous awards since opening. Among its most recent honours, it was ranked fourth in Golf World’s inaugural list of the ‘Top 100 Golf Resorts in Continental Europe’ and named by Golf Digest as a recipient of an ‘Editors’ Choice Award for Best International Resorts’ in 2016, 2017 and 2018. In addition, the resort won the title of ‘Italy’s Best Golf Hotel’ at the 2015 World Golf Awards’; retained its place in Golf World’s benchmark ‘Top 100 Courses in Continental Europe 2015/16′ rankings and claimed a ‘Golden Award for Golf’ at the 2015 Voyages & Hôtels Readers Awards. It was also named ‘Best Family European Golf Resort‘ by the 2011 Tatler Travel Guide, while it was the recipient of two accolades at the 2015 Spafinder Wellness Travel Awards in the ‘Best for Couples’ and ‘Wow Factor’ categories.

About Rocco Forte Hotels
Established by Sir Rocco Forte and sister, Olga Polizzi in 1996, Rocco Forte Hotels is a collection of 11 individual hotels and resorts. All of the hotels are landmarks, both old and new, occupying magnificent buildings in exceptional locations. Led by a family who has been in hospitality for four generations, the hotels are united by their distinctive approach to service ensuring guests experience the best of the cities and surrounding areas.

CRUISE IN STYLE TO QUALITY GOLF IN FRANCE AND SPAIN

Head for the winter sun with a Golf Break in Sicily